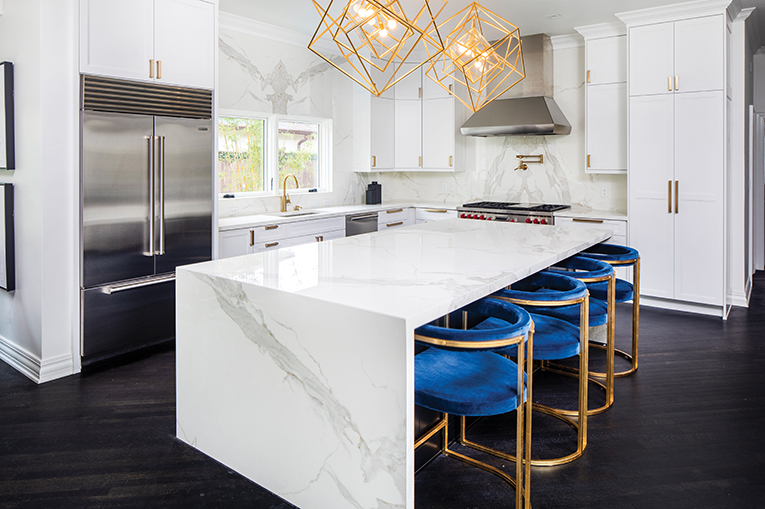 There’s a reason interior designer Nathan Vanags of Nathan Vanags Design and his team use the term “cosmopolitan” to describe their latest project in Winter Park: It perfectly sums up the Orlando firm’s design approach to renovating the 7,000 square foot home within walking distance of Park Avenue. Built in 1993, the original was modeled after a French chateau with traditional architecture and details. The current homeowners wanted to keep the essence of the residence while giving it a fresh and modern take—just look at how the design team reimagined the kitchen. “It was a casual, yet elegant approach to a big gathering place,” explains Vanags.

The kitchen, breakfast nook and family room are all located in the right wing of the first floor overlooking the pool. “Since the kitchen was part of the heart of the media room where the family hangs out, we tried to create a space that was minimal aesthetically. We wanted it to be subtle and not feel like it was in the middle of the house,” says Vanags.

For the sleek waterfall island and book-match effect on the walls, he used a porcelain ceramic slab with the look of Calacatta marble for a surface that is both chic and durable. Vanags accented the island with blue velvet chairs to add vibrancy and bring a touch of the pool theme indoors.

When possible, Vanags added nods to the home’s history within the design. Take the matte gold faucets: “It was a way to bring in a tone that I feel could’ve been used in the original home,” he explains. He also breathed new life into the hardwood floors by refinishing them with a charcoal stain. “We took the moments of the house that had a lot of architectural detail and tried to keep and preserve them,” Vanags says. The light fixtures were another way to work with the original design—in this case the lower ceilings prevalent in the 1990s. The geometric chandeliers were specifically chosen to create scale to accentuate just how dramatic the house really is, he says.

“The wife is Italian, and she likes to make pasta,” says Vanags. “Because the family is heavily into cooking, the focal point appliance-wise is the Viking range with 10 burners—it can handle a big dinner.” A wine cabinet replaced a breakfast coffee bar and an alcove was created where family and friends can gather for meals.

“We really wanted to take this formal home and make it more livable for a family with three children,” says Vanags. “We made it approachable not just to cook in, but to eat and gather in as well.”