Photo by Deb Gau
Becky Guza, at left, answered questions about the history of the Redwood Lodge at Camden State Park during Sunday’s Holiday Home Tour. Built in 1935 as a ranger’s residence, the historic lodge has original features like dark wood accents.

MARSHALL — A warm fireplace, a Christmas tree and lights can really set a holiday mood. But the stops on the Lyon County Historical Society’s Holiday Home Tour also had plenty of additional details that caught visitors’ eyes.

“Oh, my goodness,” one tour-goer said, as she stepped into the historic Redwood Lodge in Camden State Park. Greenery, Christmas lights and red and gold ornaments contrasted with the dark woodwork and fireplace mantel in the lodge’s main living room.

There were a lot of those “wow” moments going on during Sunday’s tour. But in addition to sharing their homes with visitors, it was good to have the holiday event back again, homeowners and tour organizers said.

“It feels good to be back to normal somewhat,” said Aimee Blomme. Blomme and Becky Guza were greeting a steady flow of visitors at the lodge Sunday afternoon.

“So many people have said ‘I’m so glad we’re back,’” said Paula Klein, whose home in Lynd was part of the holiday tour.

The Holiday Home Tour was one of many community events that were put on hold in 2020 because of COVID-19 precautions. But organizers said there was a strong turnout from members of the public for this year’s tour.

The tour featured the homes of Steve Fredrickson in Marshall, Jason and Paula Klein and Charlie and Dawn Deutz in Lynd, and the Redwood Lodge in Camden. All four homes on the tour had been through some extensive remodeling and decoration. Steve Fredrickson bought his 1924 craftsman bungalow in Marshall in 2019, with the encouragement of his daughter Angela Fahl.

“It was her idea,” Fredrickson said.

While Fredrickson and Fahl did a lot of work renovating the house, they tried to keep the original details whenever they could.

“For me, the really big thing was all the original woodwork,” Fredrickson said.

Charlie and Dawn Deutz said they also purchased their home in Lynd in 2019. While it was one of the newer homes on the tour, the Deutzes did extensive renovations to make it their own. The remodel was also a family project.

“I did the interior, and (Charlie) did the exterior,” Dawn Deutz said. Their son Jason and nephew Cory helped make Dawn’s designs for the interior a reality.

Deutz said she enjoyed being part of the Holiday Home Tour this year.

“It’s so much fun to see all these ladies come on the tour,” she said. “It’s such a good fundraiser for the museum.”

Jason and Paula Klein’s home in Lynd was also one of the newer homes on the tour, dating back to 2004.

“We’ve only been here about a year,” Jason Klein said. However, the Kleins have personalized their home, and remodeled the master bath and a lower-level workout room.

“It’s been fun,” Klein said of being part of the tour. “I’ve seen a lot of people I know.”

The Redwood Lodge at the north end of Camden Park dates back to 1935. Once a ranger’s residence, the lodge is now available for park visitors to reserve. Home tour organizers said they wanted to help spread the word about the lodge to the public.

Blomme, Guza and Ann Carrow worked together to decorate the lodge for the tour.

“We’re really in our element. We love to do this,” Blomme said. She said she decorated part of the lodge’s kitchen and fireplace mantel, while Guza decorated a Christmas tree for the living room, and Carrow provided bedding for the lodge’s three bedrooms.

Guza said she grew up near the park, and remembered when the Redwood Lodge used to be a private home.

“It’s nice it’s getting used again,” Guza said of the lodge. “It’s in such a beautiful area.”


Today’s breaking news and more in your inbox 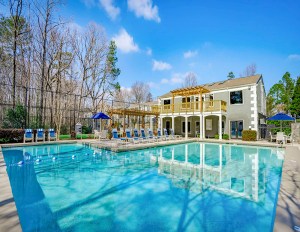