The owners of this farmstead dating to 1797 won a preservation award for their historically sensitive 2016 renovation of its 1824 farmhouse.

Sign up for our weekly home and property newsletter, featuring homes for sale, neighborhood happenings, and more. 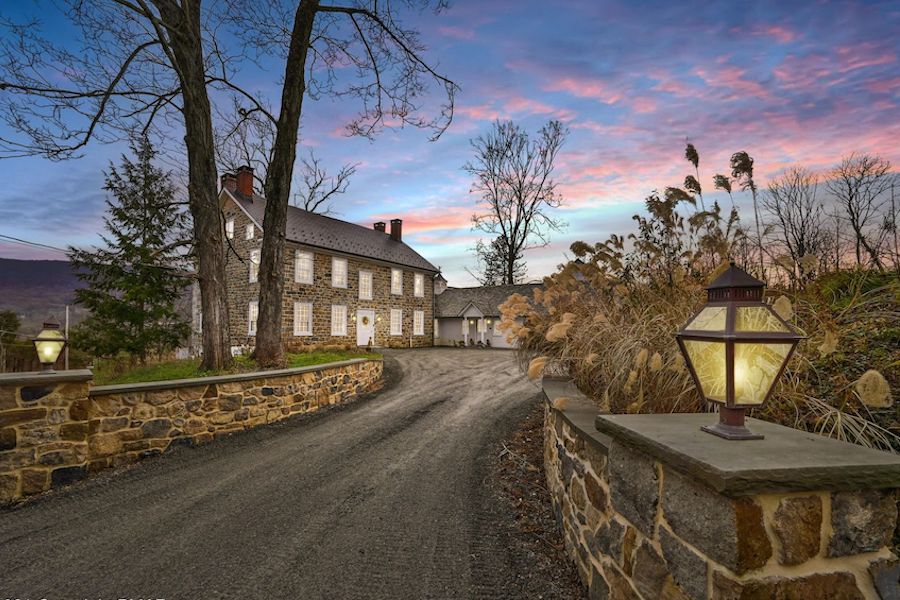 This vintage 1824 house, roughly midway between Saylorsburg and Stroudsburg and sensitively restored in 2016, looks as charming from the back as it does from the front. In fact, you’re looking at the back of 1267 Kemmertown Rd., Stroudsburg, PA 18360 | This photo and all interior photos: Steven Wallace; drone photos marked with asterisks: Jared Gilbertson, Beyond Limits Productions; exterior photos: Michael O’Donnell unless otherwise noted; all images via Pocono Mountains Association of Realtors MLS and MORE Modern Real Estate, LLC

Back when the bank barn on this historic Stroudsburg farmstead went up in 1796, the Poconos were still totally rural, with only a few towns like Milford scattered across its hundreds of square miles.

When Peter Shaw built its stone farmhouse in 1824, the land around it contained either farms like his or forests.

The Poconos today, of course, have been heavily developed as a playground for New Yorkers and Philadelphians, and some parts of the region feel more like suburbs in the woods.

Not this part, thankfully. Cherry Valley, roughly midway between Stroudsburg and Saylorsburg, remains mostly rural, which means that this roughly 100-acre Stroudsburg historic farmstead house for sale remains surrounded by fields and farms like its own. 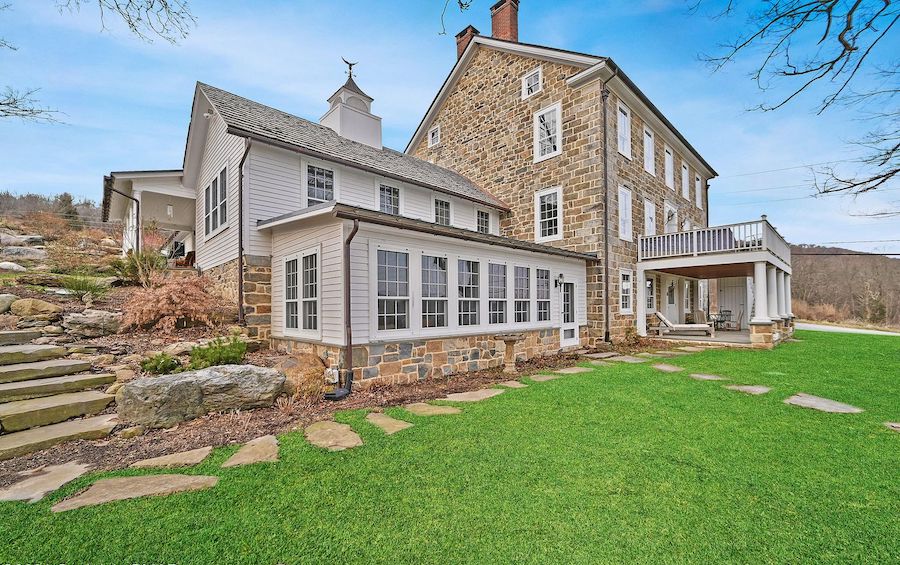 This house has gotten a few neighbors, but not too many, in the roughly two centuries since Shaw built it. If you decide to buy this historic gem, you should consider inviting them all over for a dinner party, movie night or dance party. This compound can handle all of the above and then some, and your new neighbors will be wowed by the quality of the historically sensitive renovation and expansion its current owners gave it five years ago.

So sensitive and respectful, in fact, that the work won the Preserve, Enhance, Promote Historical Preservation Award from the Monroe County Historical Association in 2017. 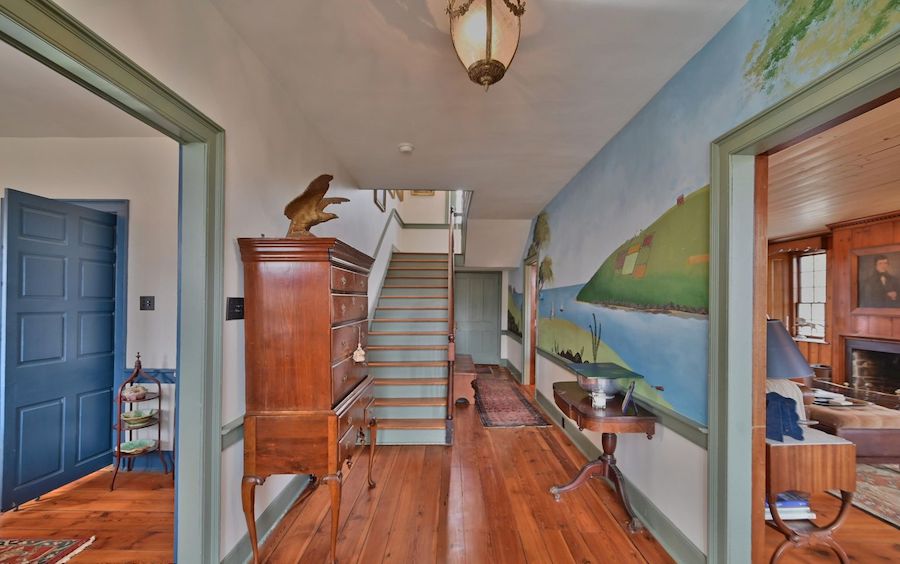 The first historically sensitive space you encounter is right inside the main-floor foyer. On the right is a mural of a pastoral stream — perhaps Cherry Creek, which flows under Kemmertown Road about a hundred yards from here. In any case, murals and wallpaper featuring nature scenes were common in 18th- and early 19th-century houses. 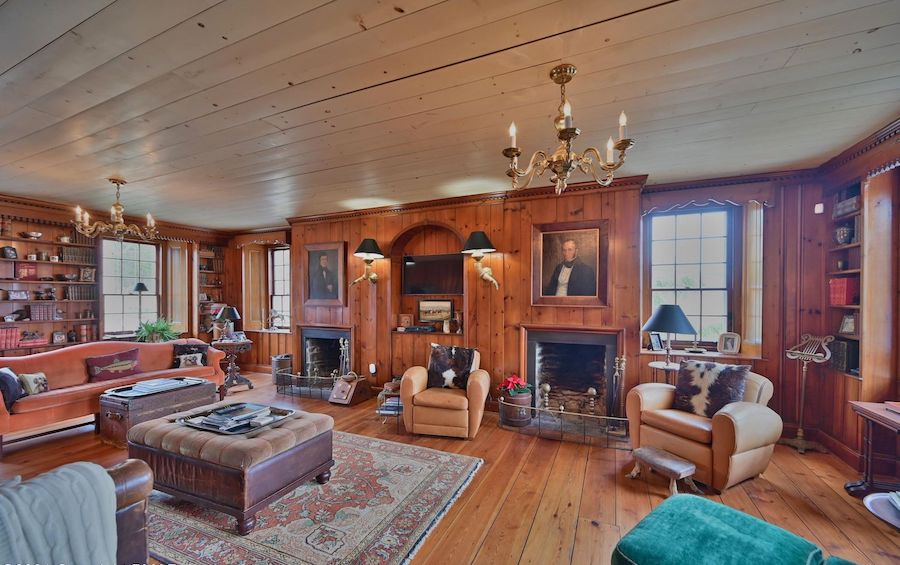 Of course, since it was built in 1824, this house has a classic center-hall Colonial layout. To the right of the foyer is the living room, which has two fireplaces and spans the entire north side of the main floor. Granted, knotty pine was not a common wallcovering in the 19th century — I associate it with the 1940s and 1950s — but it works in this context, and the furnishings and decor remain appropriate for the setting. 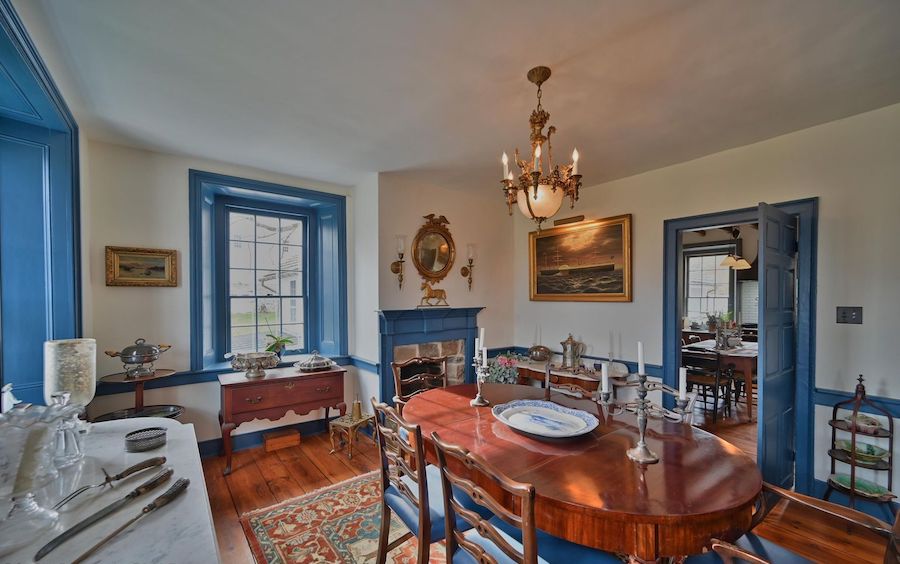 Across the foyer is the formal dining room, whose chair rail and deep windowsills are painted a lovely shade of blue. 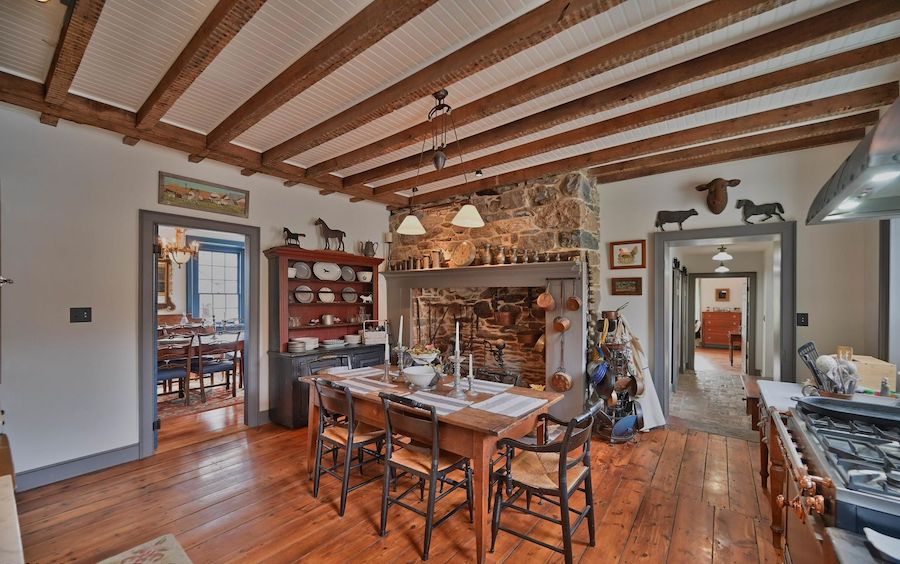 Just how far the owners went to maintain the house’s historic character becomes evident in the eat-in kitchen. 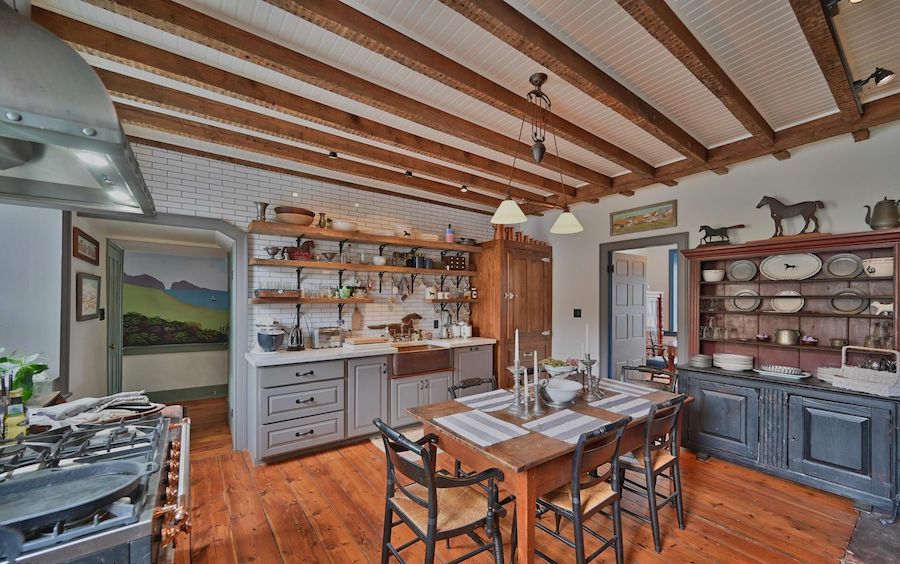 Here, the owners went to the trouble of not only installing a vintage-looking La Cornue range to take over the functions of the original hearth fireplace but also obtaining a custom-built Sub-Zero refrigerator-freezer in the style of a turn-of-the-20th-century icebox. The open shelving adds to the kitchen’s rustic character. 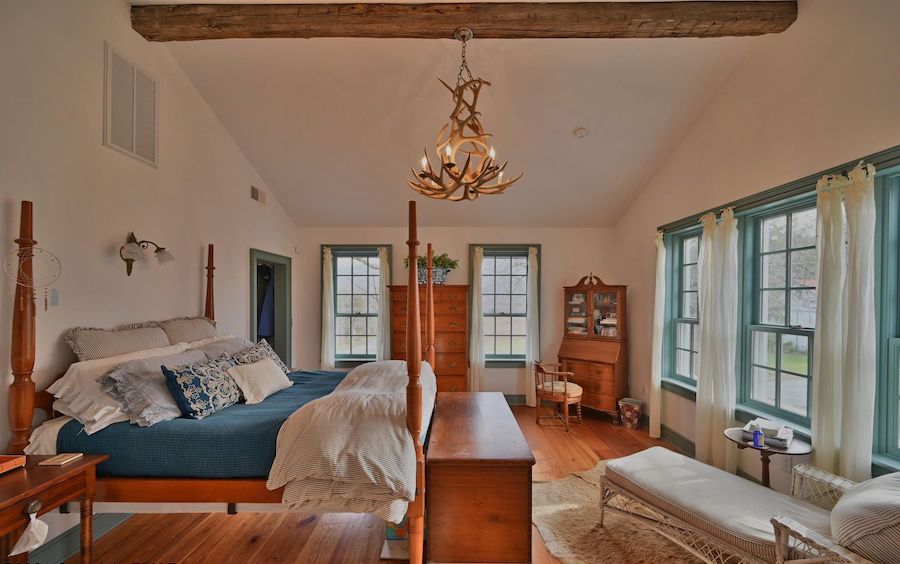 Beyond these rooms is an addition that contains a decidedly modern innovation, the main-floor primary suite. However, this nod to modern convenience has a reclaimed-wood central beam in its vaulted ceiling to preserve a historical feel. 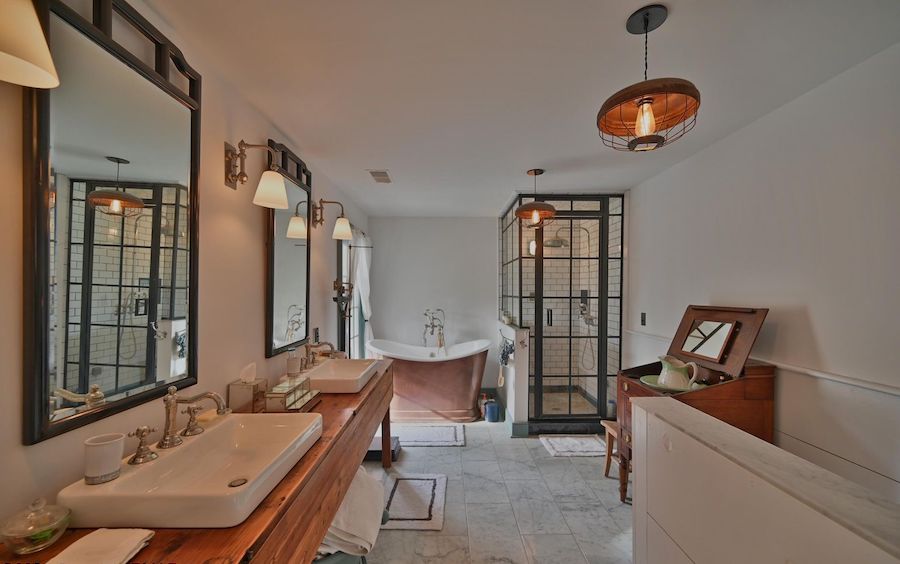 Given that indoor plumbing would not have made it out this way in 1824, the primary bathroom (as well as all the other bathrooms in this house) are later additions. But they all have fixtures that make them look like throwbacks to the past. This bathroom’s shower, though, has a more urban feel thanks to its factory-window-style enclosure. The primary suite also has its own covered porch.

The second floor contains four bedrooms and a hall bath, and the house also has an attic. But down below, the basement has been reshaped for relaxation and entertaining. 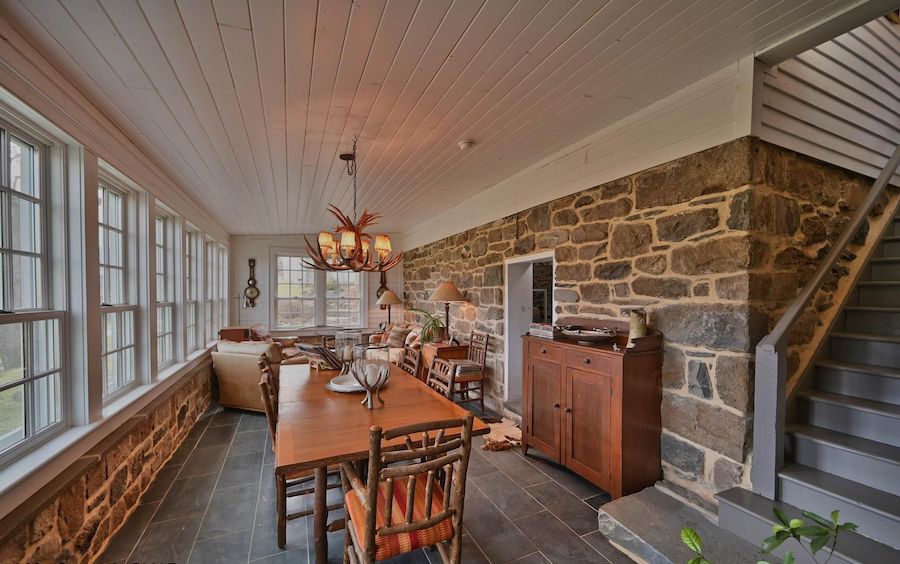 Stairs located between the kitchen and primary bedroom lead to a bright sunroom set up for both sitting and dining. 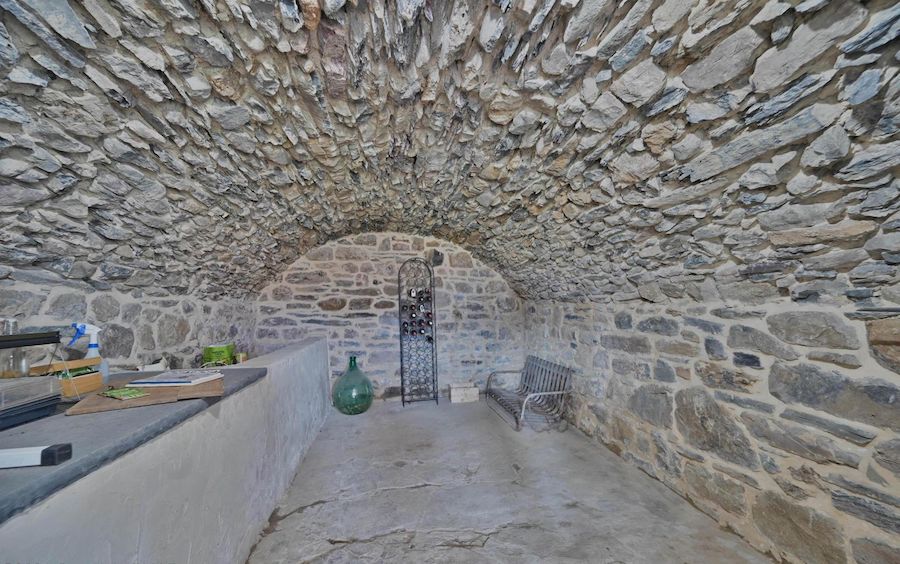 Also connected to the sunroom is the original root cellar. It could just as easily store wine, as you can see. 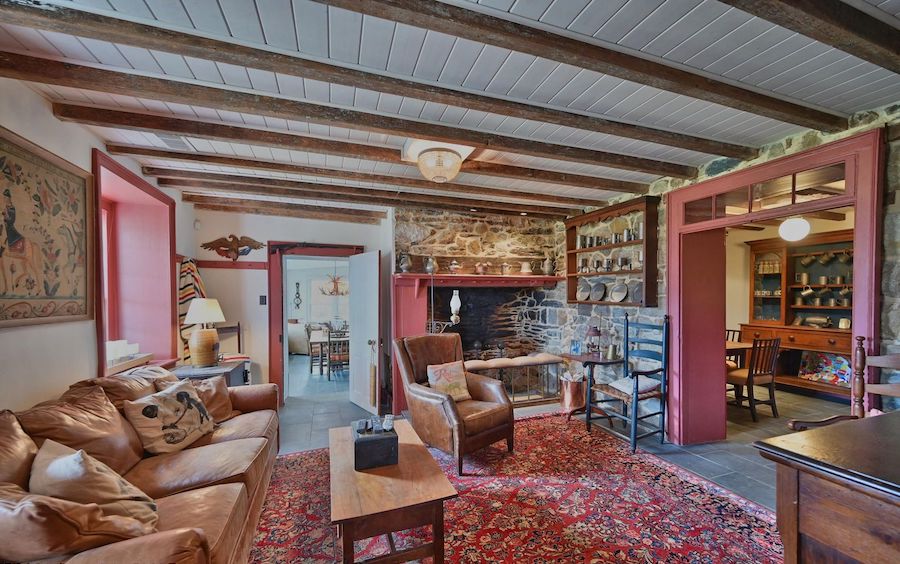 Turn left instead of right at the bottom of the stairs and you enter a large sitting room with an original hearth fireplace. 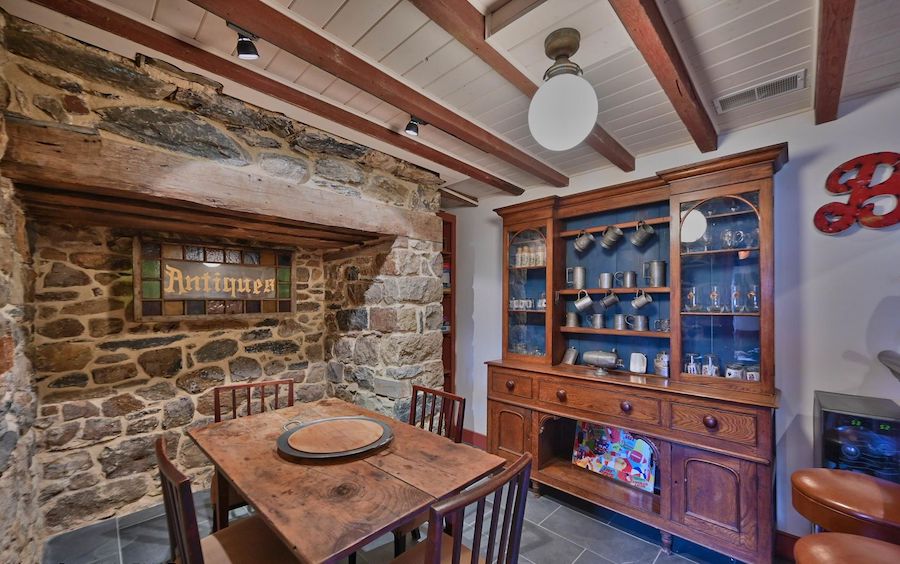 Next to this room is a cozy bar with a nook that looks like it too may have once contained a hearth fireplace. 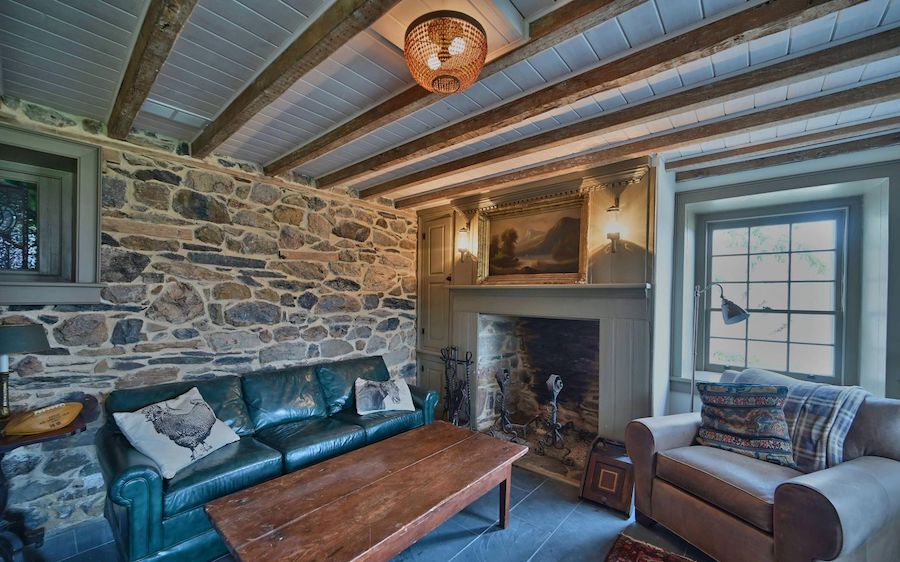 Across the basement foyer from these rooms is an equally cozy family room. 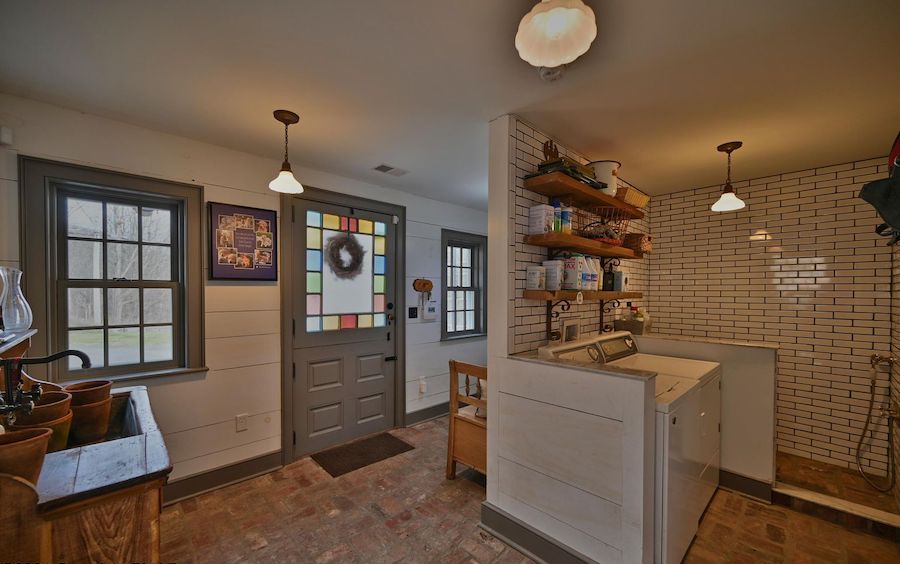 And the hallway from the basement foyer leads past a powder room into the classiest laundry room I’ve ever seen. It even has a dog wash. 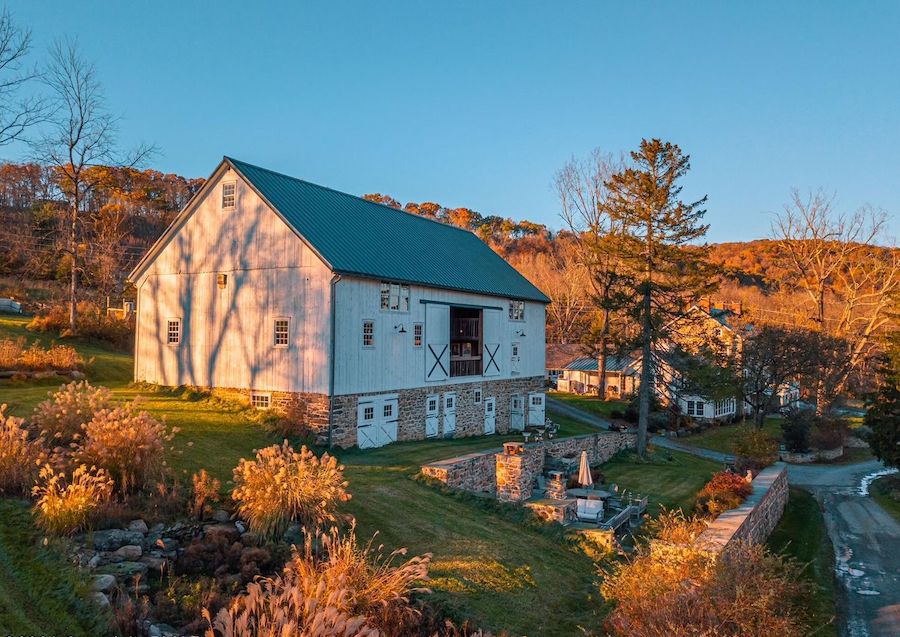 So the main house can take care of the dinner party. Afterward, everyone can dance and play the night away in the converted 1796 bank barn. 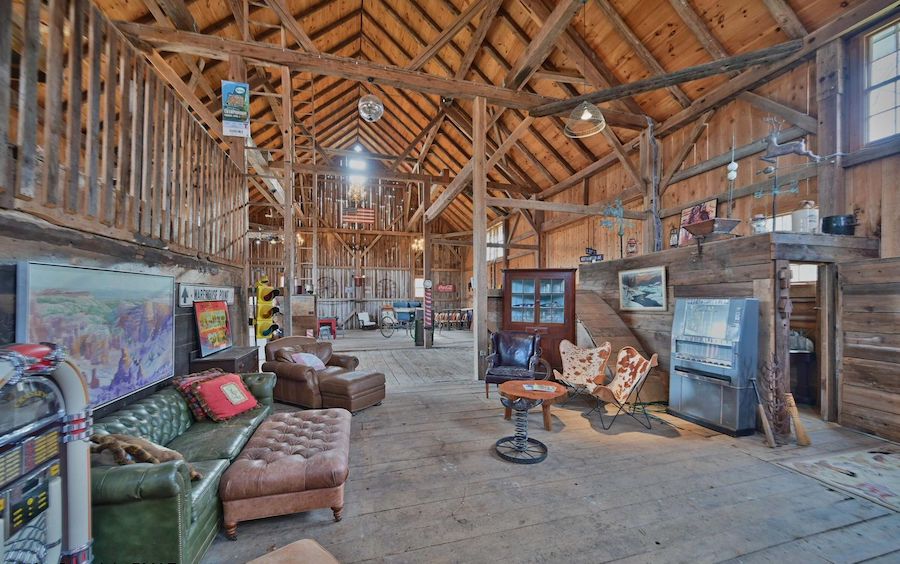 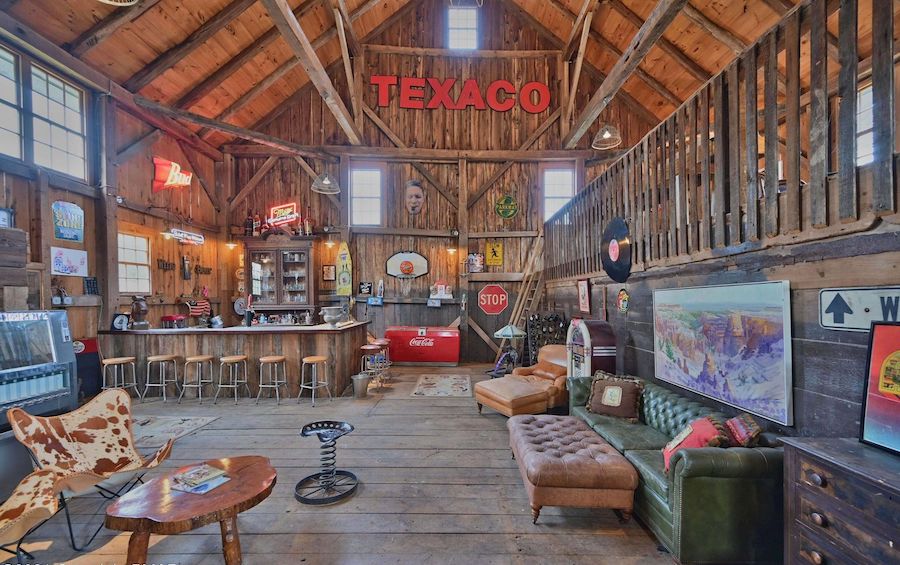 It has been outfitted with a bar and a loft overlook that could easily serve as a dance floor. A crawl space below the loft holds several storage rooms. And if you came down with the urge to actually farm on this land once again, the rooms on the floor below could no doubt be re-equipped to house horses or cows. 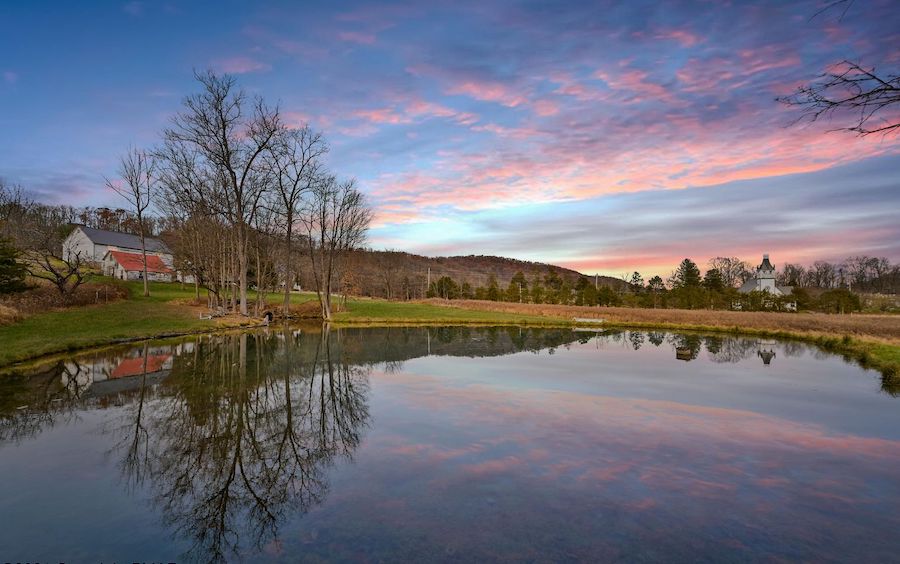 With 100 acres to play with, farming is definitely an option. So, it appears, might be fishing in the spring-fed pond. 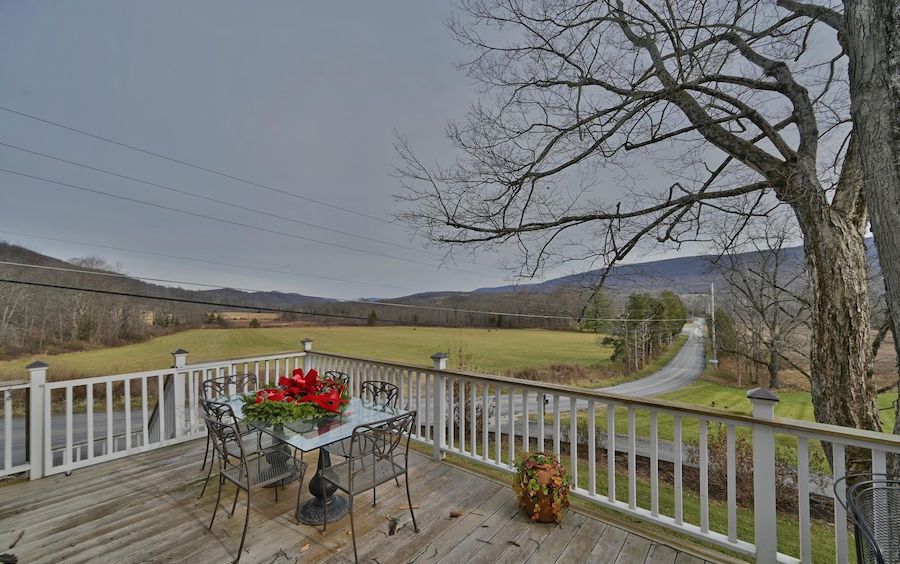 But it would be easier to simply enjoy the view from this house’s three porches: the open one off the main-floor foyer, the covered one under it, and the primary suite porch.

Since this area is still rural, it’s also quiet, and it’s a ways from here to the nearest shops or restaurants. But since this house is actually set up so that you can make your own excitement, this shouldn’t be of much concern.

Clearly, this Stroudsburg historic farmstead house for sale’s owners prized its history and did an outstanding job of preserving it. And for that they won a prize. Whoever acquires this early American gem, I hope, will prize it every bit as much.

OTHER STUFF: Even though you see more of this house and its surroundings than is typical for this feature, the photos here represent only about 20 percent of those available on the listing site, which includes aerial drone shots that set the house in the context of its surroundings. You really should check them out, or better yet, take the listing agent’s advice and schedule an appointment to see it all in person.

Updated Dec. 11th, 9:40 a.m., to correct the name of the community this house is located near. After the agent called its address to my attention, I looked at the map again and determined that it is actually just about equidistant from Stroudsburg and Saylorsburg. Given that, I should put it in the community that matches its mailing address.

Sat Dec 18 , 2021
The housing market is tough right now, but you’ve finally managed to close on your dream Victorian in a town, open floor plan home in a development or farmhouse in the country.   Now what? Break out the paint cans and get a contractor on speed dial?   Slow down. Experts say there are a few precautions […]